0 likes
Getting married during cooler temperatures? Incorporate these autumn-inspired recipes into your day. 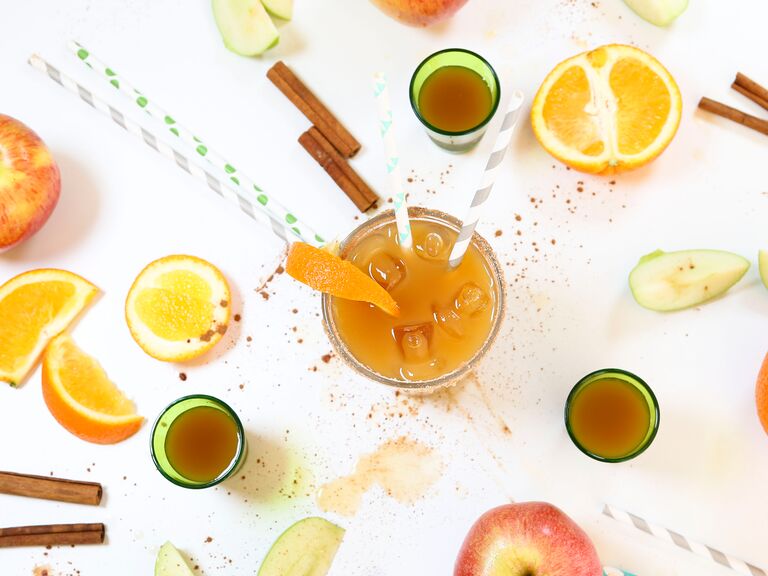 Chilly fall weather is the perfect excuse to create spiced nutmeg-, pumpkin- and maple-infused signature cocktails for your wedding. But don’t think you have to save these recipes just for your wedding day—they’re sure to be crowd-pleasers whether served at your shower, rehearsal dinner, or bachelor or bachelorette party. (Or stir one up with your soon-to-be spouse after a marathon wedding planning session!) But the recipes don’t stop here. For even more fall cocktail ideas, check out The Nest.

You’ll never want a regular White Russian again. Robust Kahlua, decadent cream and a hint of pumpkin come together in a drink that’s sure to make a bold impact. It’s perfect for an elegant hotel wedding cocktail hour.

Step 1: Add 4 ounces of the pumpkin-flavored vodka to a tumbler along with 2 ounces of Kahlua and a sprinkle of pumpkin pie spice. Shake to combine.

Step 2: Add a handful of ice to a lowball glass and pour in the drink mixture, filling the glass halfway. Finish the cocktail by filling the rest of the glass with heavy cream. Now just stir and serve!

Sangria might have you dreaming of warmer weather, but this spiced-wine-infused version makes an easy transition from summer to fall. Add a splash of apple cider and in-season pieces of fruit for the perfect upgrade on an old favorite.

Step 1: Pour a bottle of your spiced red wine of choice into a large pitcher.

Step 3: Add 1 cup of apple cider and stir before adding a cup of chopped apple slices to the mix. Let the sangria sit overnight before serving.

We might’ve finally found a drink to satisfy that never-ending pumpkin craving. And with only three ingredients on this list, it’s a cinch to make too.

Step 1: Slowly pour half a bottle of the pumpkin beer into your glass of choice and wait for the foam to settle.

Step 2: Top the beer with about a quarter of a cup of sparkling cider, leaving just enough room at the top to add a splash (or two) of the cinnamon whiskey. Garnish with an orange wedge and enjoy.

Warm apple cider is already amazing on its own. Why not take this autumn favorite up another notch with a little brandy, star anise and clove?

Step 1: Measure out a shot of brandy and add a teaspoon of honey to a small mug.

Step 2: Add 1/4 of a cup of apple cider and top with boiling water.

Step 3: Stick 3 to 4 cloves into a lemon wedge and add to the toddy along with a cinnamon stick and star anise.

Maple syrup–flavored anything practically screams fall. A sweet spoonful balances the zesty, woody essence of your traditional Old Fashioned—prepare to be amazed.

Step 1: Measure out 2 tablespoons of syrup and add it to a lowball glass along with 2 dashes of orange bitters. Squeeze an orange wedge to the mix and muddle slightly before adding a handful of ice.

Step 2: Add 2 ounces of whiskey to the cocktail and top with a splash of club soda before stirring.

We can’t think of a better choice to put your guests in a festive mood than an apple cider margarita. Serve at your autumn bridal shower or fiesta-themed wedding for an instant party starter.

Step 1: Pour out one shot each of both Grand Marnier and tequila, and add to a cocktail shaker.

Step 2: Add a half cup of cider and a splash of orange juice to the mix. Not a big fan of OJ? It’s okay to take it out completely—just don’t forget the cider!

Step 3: Add a sprinkle of cinnamon and shake to combine.

Step 4: Before pouring, run an orange wedge around the rim of a glass and dip into a cinnamon-sugar mixture to give your marg a super-sweet rim. (One tablespoon each of both sugar and cinnamon should do.)

Step 5: Pour your apple cider margarita over ice and garnish with either an apple or orange wedge or a cinnamon stick. Add a sprinkle of pumpkin pie spice and serve.

This fizzy, refreshing drink packs a whole lot of sweet flavor. Did we mention it can be made in under five minutes? Done and done.

Step 1: To make one drink, pour a single shot of the vodka into a shaker, and mix it with a half cup of pear juice.

Step 3: Pour over ice into a highball glass. Top everything off by adding a splash of the flavored sparkling water to your cocktail. Now just add a straw and enjoy!

Put a fun twist on your wedding brunch bellinis with crisp apple cider and a little fig-infused vodka. For extra flair, add a cinnamon-sugar rim!

Note: The type of prosecco is up to you—just pick a favorite. Doesn’t matter if it’s pricey or less than 10 bucks.

Step 1: Pour a splash (seriously, that’s all you need) of the fig vodka into a shaker and add 3/4 cup of cider to the mix. Shake to combine.

Step 2: Set out your champagne flutes, and pour the cider mixture about 1/4 of the way into each glass. Top with prosecco and serve.

Thank you By Nicole Piquant and www.theknot.com